THE SECRET OF THORSMOOR  -   English Summary

The Site
The Secret of Thorsmoor (Das Geheimnis vom Thorsmoor) is a historic novel taking place in the North German region of Anglia (Angeln) about the year 400 A.D., shortly  before the start of the Anglian emigration to Britain.

Anglia´s central town is present day´s Süderbrarup,  where the renowned sacrificial bog of Thorsberg or Thorsmoor is situated. The impressive archaeological finds from the bog (e.g. the gold-plated mask helmet and the sword depicted on the book cover below) indicate that Thorsmoor was a major - if not the main - sanctuary in ancient Anglia. There is good reason to assume that it was here, where the hall of the Anglian leader stood - at one time legendary Cyning Offa - , and where the momentous decision was made to emigrate to Britain.
The recently established bi-annual Thorsberg Festival pays tribute to these historical events.

The Time
The Roman Empire is near its collapse, and Europe is shaken by endless wars between migrating peoples. This is the era when tribes turn into nations, chiefs into kings,  and regions into countries. Everything is changing; East meets West, and North meets South. Cultures touch, exchange, and separate again, and war and peace change as fast as amity and emnity. Those who were once powerful, turn into the defeated, while the conquered become the victorious, and nameless princes rise to brilliant fame, just to be soon lost again in the whirling winds of time. Sometimes, the name of one of these passing heroes is preserved in the magic borderland between legend and history, and when it shows up in the fragment of an ancient saga, it is like a message from long forgotten times: Offa weold Ongle - Offa ruled over Anglia...

Almost 400 years after these events, the memory of  Cyning Offa is still reflected in the name of Offa, King of Mercia.

The Story
The story begins in today´s Anglia. Jens and Heike, a young couple, have been looking forward very much to their bicycle tour in Anglia. Unfortunately, almost everything goes wrong on this tour until they meet the shepherd Colin. From that moment on, they seem to have come into a different world  - a world without hustle and bustle, where the knowledge of long forgotten traditions is still alive, and where time passes by other rules. In this world, the ancient legends and stories of Anglia are part of present everyday life, and when Colin agrees to tell them one of these, this becomes an unforgettable journey into the past. On three long evenings, Jens and Heike listen to Anglia´s most magnificent story: The story of famous Cyning Offa, the bold lad who is only fourteeen winters old when he saves his country by fighting against two much older and more experienced opponents in one single fight. They hear how Offa steers the fate of his people with prudence and benevolence, of his wife Thrydi, the haughty princess who is just as quarrelsome and arrogant as she is beautiful, and finally of the harsh events that cause a  whole people to look for a new home - a home on the isle of Britannia, whose heart is to be called `Angelland´ from thereafter until now.
When Jens and Heike finally part from Colin and the other friends they have made in Anglia, they have learned a lot - about the country, about history, about themselves and others, but most of all that past and presence are inseparable.

The Author
Renata Petry, *1953, born and grown up near Hannover/Germany, worked as a jurist for many years. In 1996, she moved to the small Danish island of Aeroe, where she is living today. Author of the historic novels “Die falsche Reliquie” (The False Relic), also published in Spain and South America, “Die letzte Priesterin” (The Last Priestess), and the historic detective novel “Hilgensee” (Holy Lake). 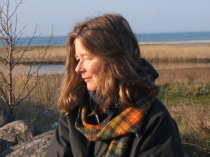 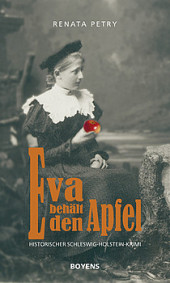